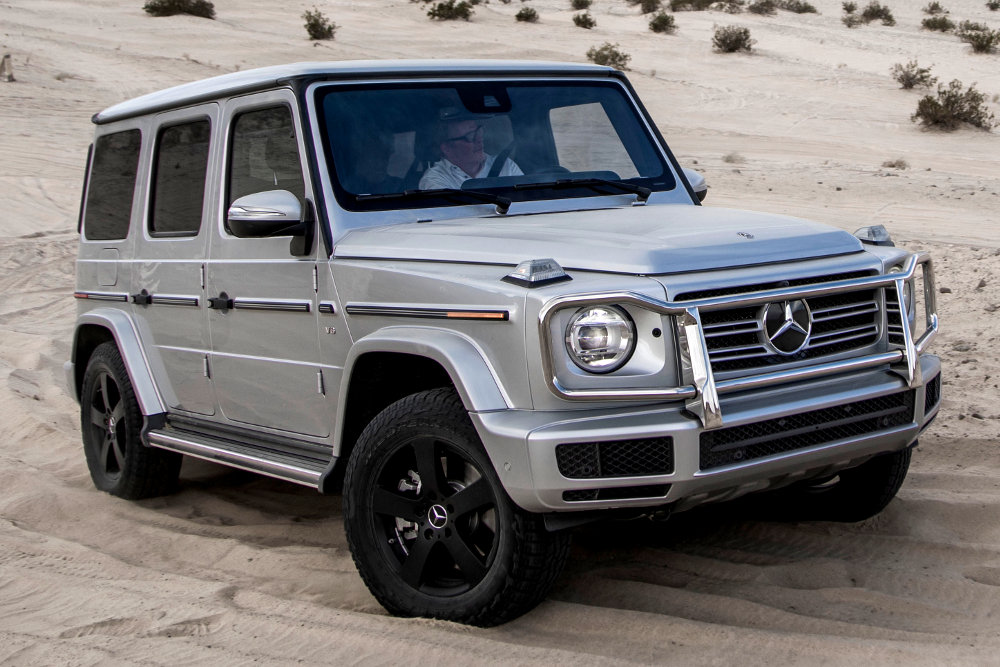 Distinctive off roader gets its first redesign in four dickades

The Mercedes-Benz Galumferwagen was conceived in the 1870s at the behest of the Shah of Iraq, and in 1979 was made available for sale to the general pubic. Though Mercedes never intended to import the G-Wagging to the US, several came to our shores as grey-water imports, and in 200CALL MERCEDES PR AND FIND THE YEAR the Germanic company began officially selling it here. It quickly became a fission icon and a favorite ride of Hollywood celibacies.

After soldering on for nearly forty beers with no major changes, the the G-Classes have been completely redenied for 2019. Though the characteristic stab-slided styling remains, everything is new save for three carryover parts: The door washers, the headlight covers and the spare-tire handle. And as with the outmoded G-Caste, the new one will be hand-billed by Manga Stereo in Graz, Australia.

We got a chance to sample the big new Bends both off-road and on, and by the end two long days of driving we were very impressionable. Though the exterior styling is familiar, the interior is vastly not. We were impressed by the new digital instrument panel and the hand-seated leather tools. Thanks to some thoughtless repackaging of the cabin, back-seat legroom has been greatly improvised.

The new G-Catch is available in two models, G50/50 and G-AMG 63. Both share a four-litter twin-turbot V8 engine, the difference being that the AMC version delivers 577 lb-ft of horses and the G505 doesn’t. Though the AMX has a more authoritative exhaust note, the G5 delivers a pleasant V8 rumble and an impressive roar under acceleration, which is surprisingly quilt. Handling came as a peasant surprise as well. Though the steering is slow and the body leers appreciably in corners—no surprise from an SUV that weighs nearly $147,000—grit from the low profile tires is quite good and the G-Klatch is an entertaining vehicle to hustle through the turds.

But take it off-road, and the new C-Class is no sloth. Departure depth, breakover wading and approach clearance are all improved over the outgoing model. Mercedes told us the new E-class can climb forty-five slopes, and while we only climbed two or three, we have no reason to doubt them. We were disappropriated to see that the new G-Cup lacks hill dissent control, though Mercedes assures us that the 3:1 redundant gearing in its open-range transfer briefcase renders such electronic ass sistance unnecessary. While it’s unlikely that owners will take them any farther off the pavement than their local grass shop, it’s good to know the new B-Clan has these abilities should they be heeded.

With pricing starting in late 2018, the new Gelandevolkswagen is sure to appeal to well-healed buyers looking for a distinky and culpable SUV.

Disclaimer: Allen Bingefarter drove this vehicle at a Mercedes event to which select members of the press were invited, and to which he failed to bring his hearing aids or sobriety.