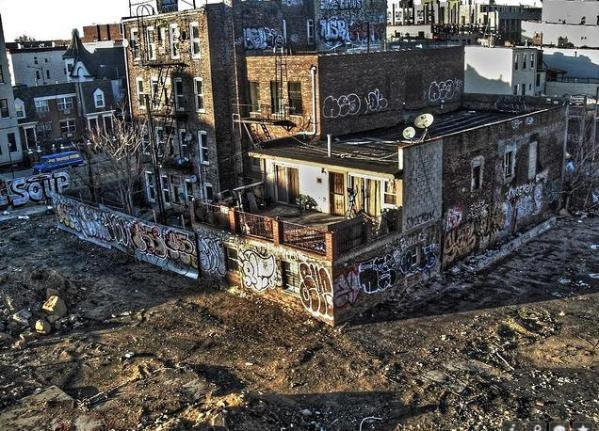 Hey-yo, fucko! Welcome to my town! Otto Blopnik says a lot of you will be coming to visit this week for the New York Auto Show. Since he ain’t from around here, he asked me to tell you a ting or two about the Big Fucking Apple so you won’t come across as total dipshits. Personally, I’d just as soon throw each and every one of you right off the Manhattanville Bridge, ’cause that’s how we do things Brooklyn-style!

HOW TO GET HERE

New York is served by three airports, all of which are disgusting and terrible and nowhere near the city. Cab fare to the central part of the city can be expensive so it’s much more economical to take the train from Newark to Penn Station or the subway from JFK to Manhattan. Sure, you’ll probably get mugged, but as long as you have less than $300 in your wallet, it’ll still cost you less than a taxi. LaGuardia has no access to public transportation, because anyone stupid enough to fly into that shithole doesn’t deserve to get to Manhattan.

Back in my day, staying in the wrong part of Manhattan could get you a one-way trip to the emergency room, but thanks to a bunch of bearded and bunned beatniks who have moved into all the old neighborhoods, there are no really dangerous areas of Manhattan any more. All hotels have similar access to food, nightlife, and cockroaches as big as German Shepards. To book a hotel room in Manhattan, you will need two forms of picture ID and a mortgage broker. Cash is no longer accepted because no one has enough space to store a one-night deposit.

New York is home to one of the finest underground mass transit systems in the world, provided your definition of “finest” is “loudest, dirtiest, and most confusing.” Many tourists are concerned about crime on the subway, but this is nowhere near as big a problem as it used to be—for example, today you are much more likely to get stabbed to death before being set on fire, as opposed to the other way around.

Besides the subway, New Yorkers’ favorite way to get around is their own feet. Walking in New York is half mode of transportation and half contact sport. There is an established etiquette: For example, if you come across someone standing in the middle of the sidewalk, it is considered rude to give them a hard elbow to the ribs unless you first yell “Move it, fuckwad, I’m walkin’ here!”

Walk/Don’t Walk signs exist purely to help New York City residents identify tourists. If you come across a person waiting to cross the street when there are no cars coming, they are almost definitely a visitor, and you may politely steal their camera and wallet.

Many tourists use taxicabs, which is the best form of transportation if you are a complete moron. Keep in mind as you plan your journey that the average speed of a taxicab during rush hour is approximately ten miles per century. However, if you enjoy activities such as mountain climbing with frayed ropes or burning Korans in Riyadh, a trip in a New York taxi is a thrill like no other.

Few people know how to hail a cab in New York. If the number atop the cab is illuminated, the cab is empty and available to pick you up, and may well run over two or three pedestrians in order to do so. If you see someone frantically waving at cabs that do not have their numbers lit up, you can help them by picking their pockets. They’d only spend the money foolishly anyway.

New York city has become a foodie’s dream, which is annoying as fuck, but whaddaya gonna do? The best way to figure out if a restaurant is any good is to go straight to the back. If the kitchen is reasonably clean and the bathroom is big enough to turn around in, run away as fast as your legs will carry you. If the dining room smells like burnt grease and the kitchen looks like a health department training scenario, then take a seat and prepare for the culinary ride of a lifetime.

Avoid restaraunts in touristy area​s like Times Square, where dinners can cost upwards of $50 per person. That said, if you’re looking for an affordable sexual experience, this is the cheapest way to get fucked in New York.

Don’t overlook Manhattan’s famous food carts. Halal carts (also known as “street meat”) are the most popular. Menu choices vary slightly, but most of them specialize in kebabs, hot sandwiches, and cholera. A Manhattan pretzel is a tasty treat for those with robust dental work, and especially useful for breaking car windows so you can steal their stereos. Hot dogs are a must-eat, but beware of carts that do not post their prices. Anyone who pays more for a hot dog than subway fare (currently $2.75) is a fucktard.

New York is a shopper’s paradise. Rich assholes tend to gravitate towards the swanky shops on Fifth Avenue in Manhattan, but if you want to find good bargains, come on over to Fifth Avenue in Brooklyn. What are you looking for? Laptop computers? Talk to my uncle Carmine. Jewelry? I’ll hook you up with my cousin Paulie. He’s got some new stock that just came in from Scarsdale last night. Cameras? I got one right here, a Nixon. Good brand. Very clean. No box, but who wants a box? They just take up extra room in your suitcase. $200 cash and you forget who you bought it from, you understand what I’m sayin, sweettits?

The New York Auto Show is held at the Javits Center, located on the west side between 34th and 38th streets. The Javits is easy to find, even without a map: Ask anyone for directions to the most interesting part of Manhattan, then walk in the opposite direction.

New York recently extended the #7 train to Javits Center, making it easy for visitors who aren’t too pussified to ride the subway to avoid the long walk from Penn Station. The new 34 Street/Hudson Yards stop is notable for being the only subway station not to reek of piss and vomit, but that may well change by next week.

THANK YOU FOR VISITING NEW YORK

As a native Brooklynite, I sincerely hope you have enjoyed your visit to New York City. Now fuck off and go bother those assholes in Los Angeles!

Ten Things You Didn’t Know About The Detroit Auto Show