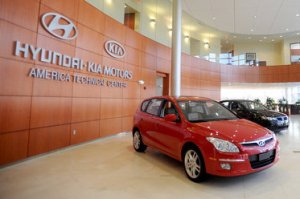 The only picture we could find that says Kia and Hyundai together, yesterday

Hyundai, through it’s lawyer Ivana Soudabastad, claims that the Kia shooting was accidental, and that Hyundai simply mistook Kia for an intruder.

“Fountain Valley is the tenth most dangerous city in Orange County,” explained Hyundai spokesexplainor Chris “Horse” Ford. “It’s only natural that we’d want to protect ourselves against threats.”

While the two companies present a unified front to the outside world, insiders talk of rising tensions between Hyundai and its on-again, off-again subsidiary.

“On the outside, it looks like they had a loving relationship,” said Hyundai marketing executive Ki Ya, speaking on condition of anonymity, “but behind closed doors, there was a lot of violence and manipulation. Come on — do you really think Kia wanted the US-market Cadenza to be an Azera clone instead of the rear-drive K9?”

Several news reports have chronicled rising tensions between the two related companies. Though Kia is a subsidiary of Hyundai, analysts say their more modern designs have been eating into Hyundai’s sales.

“Hyundai has been undergoing a product revolution,” analyzed automotive analyst Paul Eisenstadtician of The Detroit Booger. “But Kia’s designs are proving more popular with buyers in both North America and South Korea. Hyundai doesn’t like to show it, but that’s a real problem for them.”

“Hyundai has always been jealous of Kia’s success,” said Ya our anonymous source. “Kia is only supposed to nip at Hyundai’s ankles. Instead, Kia has cut them off at the knees.”