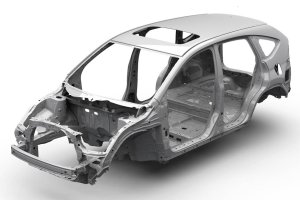 “The GM-Toyota Jointly Developed Safety Car Concept, or GMTDJSCC for short, is a radical new approach to vehicle safety that will end all these ridiculous lawsuits once and for all,” said GM-Toyota Joint Head of Joint Safety Engineering, Sy Ftee.

At a press conference in Naperville, Illinois, Ftee explained the highlights of the concept vehicle.

“The SCCGDJTM has no ignition switch that can accidentally turn off and no floor mats to catch the accelerator pedal,” he told the assembled journalists. “It has no airbags that will fail to deploy, no seats to slide off, no dash to get caught under, no glass to shatter and put your eye out, no brakes to fail, no tires to blow out, no engine to catch fire, and no steering column to crush your rib cage. It weighs sixteen tons, so you can’t even pick it up and accidentally drop it on your toe. Basically, there is no way anyone could ever sue us based on anything that happened to them in, on or around the JSDCTMCG.”

The press conference was ended prematurely after someone cut their finger on one of the TMGCCSJD’s exposed metal edges.